The above excerpt is from Warren Buffett’s 1964 shareholder letter where he showed masterfully how powerful compounding benefits are.

Speeding up your CI pipeline can have similar exponential effects.

How does Docker layer caching speed up the CI build?

When building an image, Docker steps through the instructions in your Dockerfile, executing each in the order specified. As each instruction is examined, Docker looks for an existing image in its cache that it can reuse rather than building it. This can save a lot of time if the instruction is a slow one like npm install or bundle install.

It’s a Docker best practice to leverage the layer cache.

I build my Docker images as the first step of my Drone pipeline - as opposed to building it as the very last step and treating it only as a build artifact - therefore it’s important that the layer cache works reliably.

The good news is that it just works if I have a single Drone agent. However with multiple build agents the layer cache state differs between agents and does not work consistently.

Furthermore if I use the plugins/docker plugin to build Docker images, the layer cache does not work at all given its docker-in-docker (dind) architecture.

Distributing caches across agents or mounting the layer cache into a dind setup is a gargantuan task. Instead we can use docker build’s --cache-from option.

With --cache-from you can specify a list of images what docker build will consider as a source of cached layers. So instead of relying on an unspecified local state you can rely on tagged images in a registry.

Let’s take a simple Dockerfile with an apt install step and a .drone.yml file that uses the plugins/docker plugin to build the image.

The console output shows that first the plugin pulls the listed image from the registry and then includes the --cache-from option in the docker build command. At the end you can see that the apt step is using the cache.

If you would take the above snippets, the build would use the cached layers even though you have not built this image before.

How to use cache-from with multiple branches?

The previous example used the latest image tag which is not a good practice in general and it also makes the caching strategy unpredictable if you use multiple branches.

To handle multiple branches we have to adjust .drone.yml.

The trick to have branch specific cache sources is to tag the branch images explicitly.

Should you build this branch the first time, the master image will provide some level of caching. Once you built your branch once, the following builds will have a branch specific cache image.

And yes, you can have any number of images specified in --cache-from.

What about time spent downloading those images?

Since you have to pull the --cache-from image first from the registry, it can happen that the time you gain with caching the layers you lose on downloading the images. This depends on a few factors, like the size of the image and the time it takes to build it.

It happened to me some cases that my aggressive caching strategy made the build slower, so it’s worth keeping in mind the network cost and measuring the build time.

How I saved 4 minutes build time of a Ruby app?

I had a large Ruby app with a Dockerfile having the following snippet:

First it copies Gemfile then did a bundle install and only after copied the rest of the source code. With this trick I made sure only a Gemfile change busts the cache.

The only problem was that bundle install took four minutes. The layer cache was working reliably when I had a single Drone agent but became an issue once there were more.

Using cache-from saved this 4 minutes consistently and bundle install only happened when the Gemfile really changed. I was happy.

First I wrote about layer caching in general and its problems in a distributed setup.

--cache-from is able to solve layer caching reliably in Drone.io even when using the plugins/docker plugin to build Docker images.

As a closing thought I include this oldie from xkcd. If you can save five minutes on a build that is running five times a day, you can easily spend a day or two optimizing it with --cache-from. So what are you waiting for? 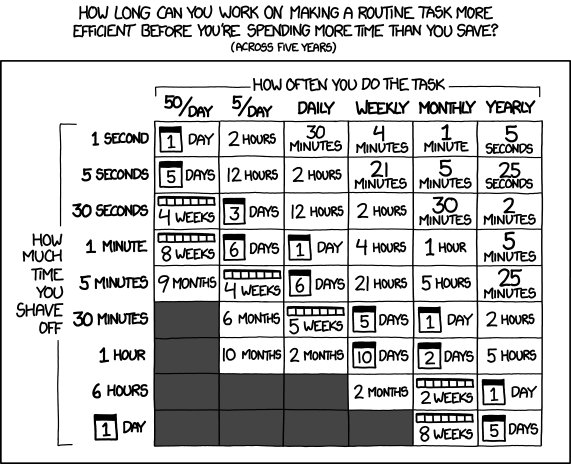 So how much Mona Lisa worth today?

I left the story by saying that should Francis I of France invested his money in the market he would have made a gajillion by now. But how much Mona Lisa worth today?

And some people say art is a good investment ;)